A Christian Community, welcoming to all, that nurtures worship, prayer, study, fellowship, and service. 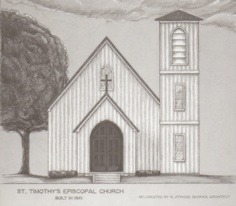 Rendering (by Atwood Skinner) of the frame church.

In the 1850s, Wilson was a village of about 250 persons. Bishop Thomas Atkinson celebrated the first Episcopal service in October 1855. Regular Episcopal services, held in the old Masonic Lodge on Lodge Street and led by a deacon, began in 1856. Bishop Atkinson celebrated the first confirmation in Wilson in April of that year. St. Timothy’s was admitted to the diocese in 1859. The land for a building was acquired in 1860, and a frame church was completed at a cost of $3,000 in 1861. The parish at this time comprised ten communicants. 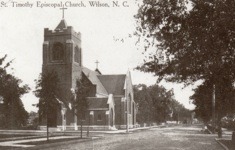 Wilson began to prosper in the 1880s. With an energetic rector (Benjamin Bronson) and faithful lay leadership (Thomas Davis, senior warden 1860-1915), the church built a rectory, added a narthex, and enlarged the vestry room. But as the nineteenth century drew to a close, St. Timothy’s congregation was outgrowing its original frame building. The first service in the new building (a baptism) took place on January 19, 1908. 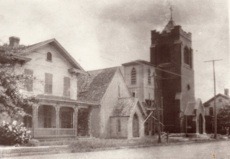 Two rectors, the Reverend Downs Spitler and the Reverend Philip Byrum, also served St. Mark’s Episcopal Church. In 1996, with the help of the Reverend Philip Byrum and several members of the parish, St. Timothy’s initiated a Spanish-speaking ministry. In February, 2000, the Hispanic congregation became a mission, renamed La Iglesia de la Guadalupana, in the Diocese of North Carolina; on Easter Sunday of that year it moved to St. Mark’s Church, and in 2005 it broke ground for a new building. 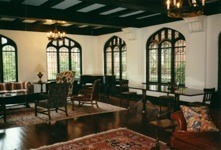 St. Timothy’s observed its sesquicentennial in 2006. Our challenge now is growth. We are blessed with strong leadership. With God’s help we will continue to grow as a community committed to living His word. At this juncture in our history, we commemorate the past, celebrate the present, and contemplate the future. Thanks be to God!

Theme by Anders Noren — Up ↑